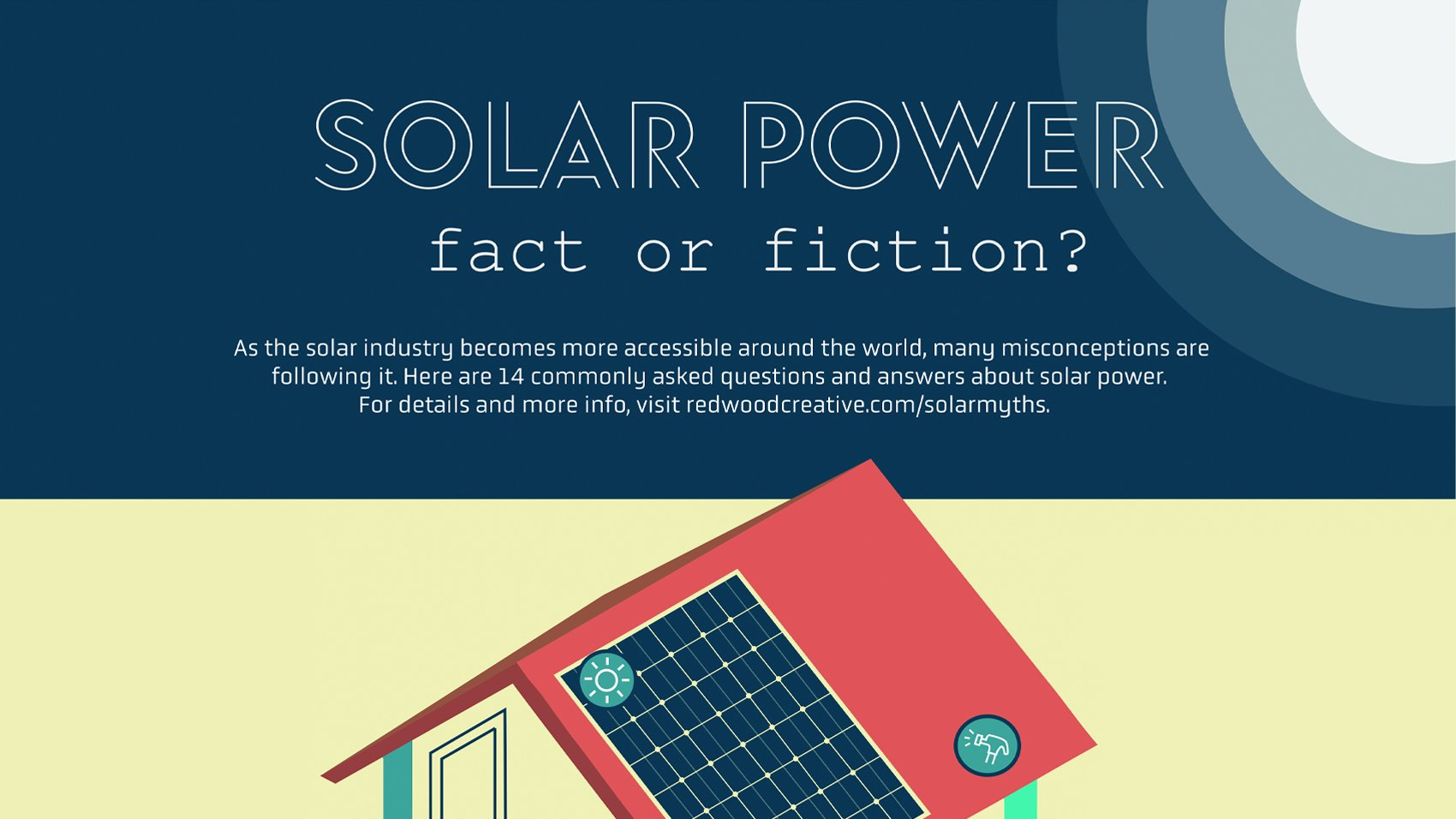 As the solar industry becomes more accessible around the world, many misconceptions are following it. Here are 14 commonly asked questions and answers about solar power. 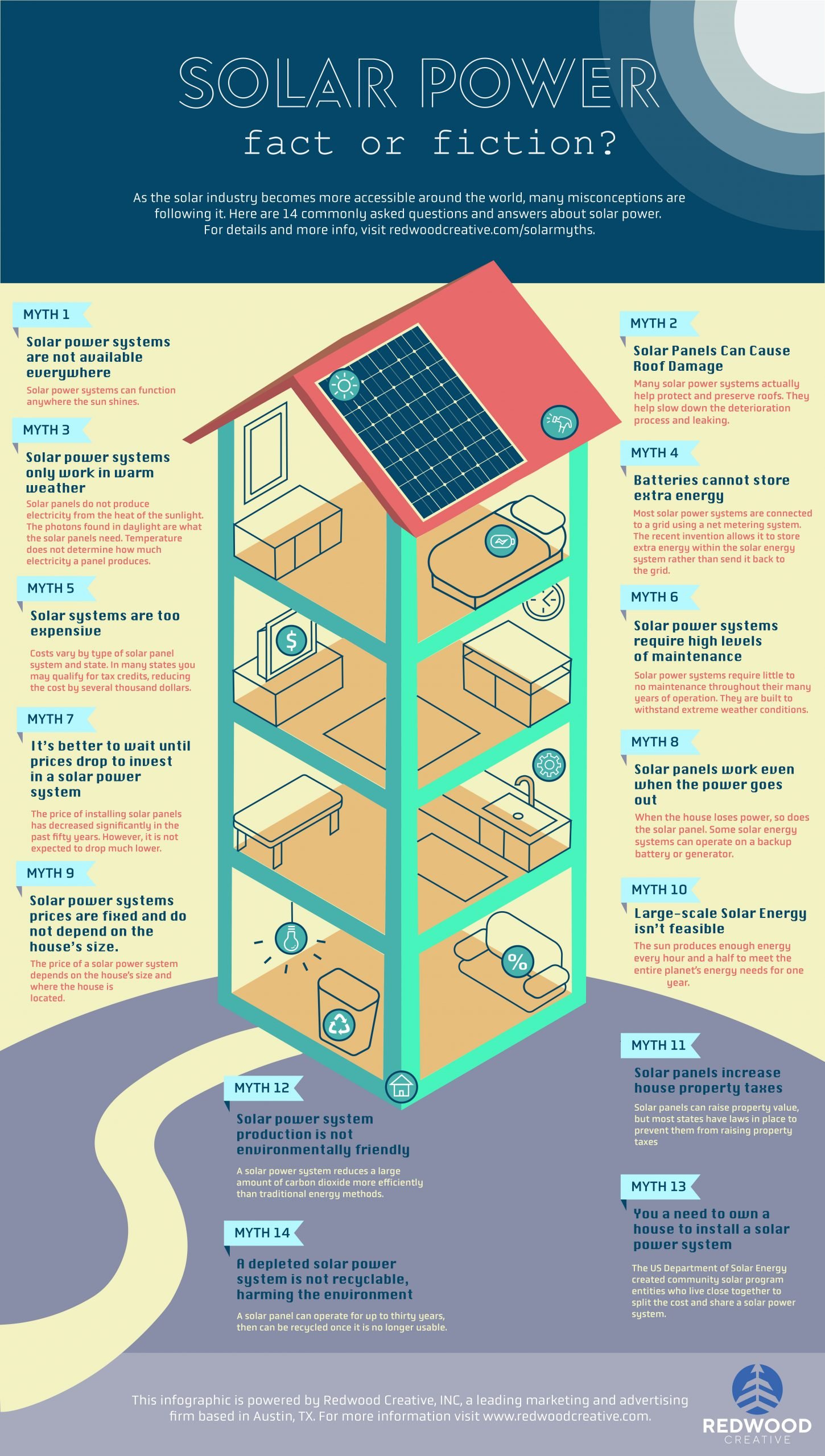 Many solar power systems actually help protect and presrve roofs. They help slow down the deterioration process and leaking.

Solar panels do not produce electricity from the heat of the sunlight. they photons found in daylight are what the solar panels need. Temperature does not determine how much electricity a panel produces.

Most solar power systems are connected to a grid using a net metering system. The recent invention allows it to store extra energy within the solar energy system rather than send it back to the grid.

MYTH 5 – Solar systems are too expensive

Costs vary by type of solar panel system and state. In many states you may qualify for tax credits, reducing the cost by several thousand dollars.

Solar power systems require little to no maintenance throughout their many years of operation. They are built to withstand extreme weather conditions.

MYTH 7 – It’s better to wait until prices drop to invest in a solar power system.

The price of installing solar panels has decreased significantly in the past fifty years. However, it is not expected to drop much lower.

MYTH 8 – Solar panels work even when the power goes out.

When the house loses power, so does the solar panel. Some solar energy systems can operate on a backup battery or generator.

MYTH 9 – Solar power systems prices are fixed and do not depend on the house’s size.

The price of a solar power system depends on the house’s size and where the house is
located.

The sun produces enough energy every hour and a half to meet the entire planet’s energy needs for one year.

Solar panels can raise property value, but most states have laws in place to prevent them from raising property taxes.

MYTH 13 – You a need to own a house to install a solar power system.

The US Department of Solar Energy created community solar program entities who live close together to split the cost and share a solar power system.

MYTH 14 – A depleted solar power system is not recyclable, harming the environment.

The sun produces enough energy every hour and a half to meet the entire planet’s energy needs for one year. 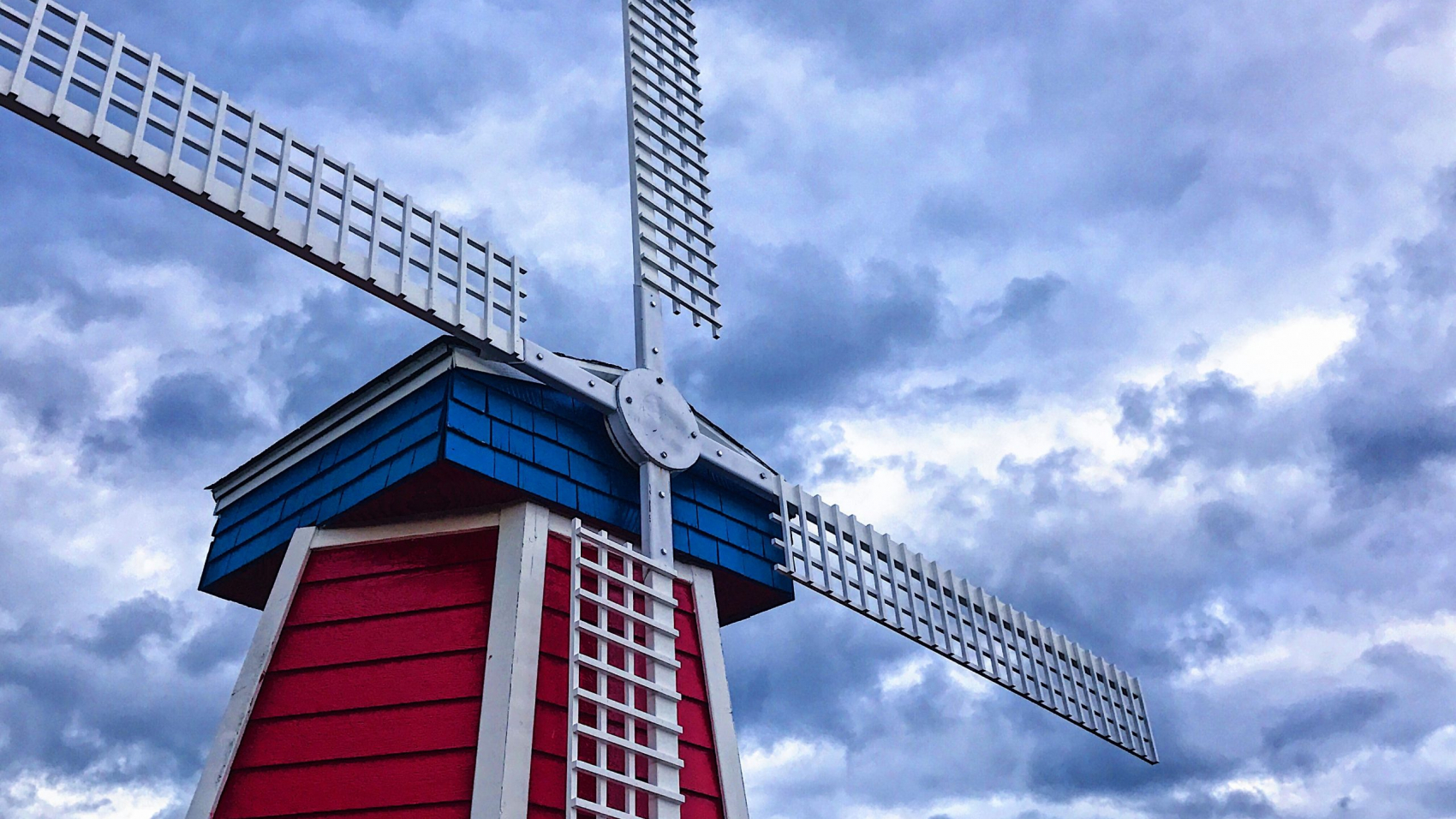 For part 3 of the energy history series, today’s article will be about the history of wind power. Humans have been utilizing Earth’s resources for hundreds of years. We use wind for sailing, power, paragliding, and even just to freshen up our homes. Here’s how wind contributes to our way of life. 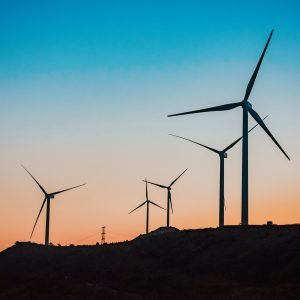 First, let’s go back to 5,000 B.C. Egypt, when Egyptians were exploring the vast Nile River. They discovered how to travel up and down the Nile in boats, using papyrus leaf to catch the wind. Then, a few thousand years later, the Chinese discovered wind-powered water pumps.  Around the same time, the Persians were developing the earliest windmills to grind their grain. Soon, papyrus leaves turned into thick canvas for sails, and wind mills were aiding in production of flour, grain, and salt.

Wind turbines are a descendant of the windmill, which became popularized around 1100. The first of wind-powered turbines to generate power started in 1887 in Scotland. Professor James Blythe constructed a 10 m high wind turbine with cloth sails in his garden. This was the first successful wind turbine to power a home. Blythe wanted to share his convenient discovery with his community, but they rejected it. They thought it was the work of the devil. However, Blythe’s work took only less than a year to reach the U.S. when Charles Brush built a wind turbine to power his Ohio mansion. In 1891, Poul la Cour, develops a regulator to control electricity flow. He then worked off of that and built a small power plant in Denmark 4 years later.

Now, wind turbines are prominent in the Great Plains in the United States, offshore, China, and Germany. You can install a personal wind turbine for your home for a couple million dollars. Turbines typically last about 20-25 years.

Did the history of wind power blow you away? Interested in marketing assistance? Contact Redwood Creative today!